Even though some improvement is noticeable in the latest research, findings show that youth do not participate enough in the creation of cultural contents, and that the culture offer for youth is not evenly geographically distributed. Survey on Position and Needs of Youth of the Republic of Serbia from 2016 shows that, viewed from the regional aspect, significant differences exist between Belgrade and Central Serbia in terms of the offer of cultural contents. Unlike previous years, it is noted that a larger number of young people believe that there is enough available content for young people in their environment than those who think that there is not enough content. Until 2019, the prevailing opinion was that there was not enough cultural content for young people - 66% in 2016, 61% in 2017 and 67% in 2018. In 2019 this percentage is 52%.  On the other hand, while about a third of respondents in previous research cycles thought that there was enough cultural content, now this share is growing to 58%.

Figure 8.1.1: Is there enough available cultural content for young people in your area?

Source: Survey on Position and Needs of Youth of the Republic of Serbia, 2019

Young people share the opinion that public space for spending free time of young people exists  in their local community (a total of 74%), 18% do not know, and 8% say that such space does not exist in their local environment. Among those who say that there is a space for young people in the local environment, 42% of them believe that there is not enough space, while every third respondent (32%) believes that the existing space is sufficient for their needs.

Serbian youth is not homogenous in terms of cultural consumption and production. Among the biggest obstacles to their participation in cultural activities listed by the respondents, those that stand out are the lack of money and unfavourable geographical circumstances. As indicated in the National Youth Strategy 2015-2025, a study of social background of youth revealed that a very important prerequisite for the involvement of youth in cultural and creative activities was their household income - the higher the income in their household, the greater the degree of their involvement in culture. In addition, young people from more favourable social backgrounds, whose parents are highly educated, youth residing in urban areas, university students and young experts are at the forefront of the cultural scene in Serbia. The Survey on Position and Needs of Youth of the Republic of Serbia from 2019 further reveals that writing, painting and playing an instrument are the least popular activities among Serbian youth as 44% of young people say that they never do it in their free time. Writing, painting and playing an instrument are collectively regularly or often practiced by 20% of respondents, and visits to theatres, cinemas, concerts are collectively practiced regularly or often only by 28% of young people. 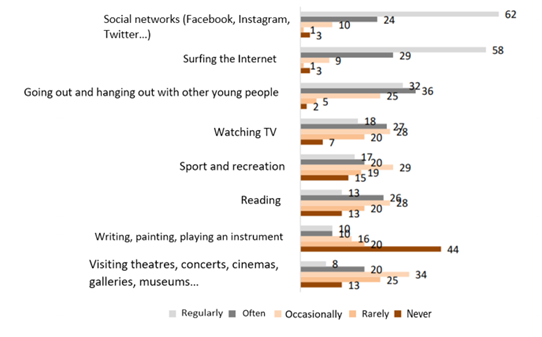 Figure 8.1.2:In which of the following ways do you spend your free time and how often do you practice these activities? 2019, in%

Source: Survey on Position and Needs of Youth of the Republic of Serbia, 2019

Besides this, a research by the Centre for Studies in Cultural Development (CSCD) have addressed the cultural needs of young people. Namely, the largest number of high school students in the Republic of Serbia read only recommended school reading books, very rarely go to theatres, museums, galleries and similar. Although almost half (49.5%) of young people (15‒29 years) point out that there are three to five hours of free time during the day, only 9.3% visiting cultural facilities ranks among the three favourite activities to complete it.